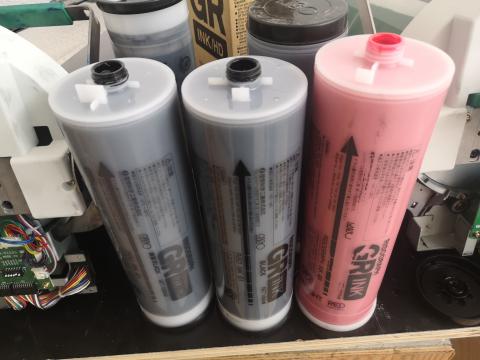 I got really confused about that whole black-HD-ink-GR-3770-3750-compatibility thing and i wanted to be sure about my drums working in both of my machines as they should, so i went for a longer shot.

RISO came up with the first ever 600dpi Machine GR3770 in 1997, two years after the closest model 3750 was launched. To ensure the higher resolution would make it to the final print, they came up with new masters (78W/S-2569 instead of 77W/S-132 for the 3750). Because the former black ink was too thick for these, they made HD black ink basically thinner.

That produced changes that you can see in two parts of the GR drum itself:

I talked to a technician at riso germany. With a look at their old order numbers for GERIS parts, which is the name for the HD black drum, he also said that only the ink pump unit and the ink bottle controller have changes. Which i believe is nothing more than the above. The drum PCB with the ink sensors does not work any different.

I learned that part numbers you find in the parts manual and on the parts are actually factory numbers, but can differ to order numbers, which is he said is true for those two parts. The drum PCB (with the ink sensors) was 017-60020-300 for most of my drums, one had a 017-60020-407. They should be technically the same, the guy said.

So my believe is, you can use “HD drums” for colors AND also in an GR3750. You just make sure that you set up the dip switches no. 5&6 on the Drum control PCB2 correctly, don’t use the HD ink and also get rid of the HD lower drum cover which normally protects the drum from being inserted in a 3750.

Also you could DIY-turn a color drum into a HD drum, as long as it provides the new version of the drum control PCB2 (019-51005-106) and not the old one (019-51005-009). Put an extra switch to the bottle controller and add extensions to the ink nozzle. I believe that could be easily done with anything you find that fits.

Besides the better ink flow with the extended nozzle there is seemingly just additional distinction for the RISO to recognize HD ink. Would be interesting to know what the machines (GR3770 and GR3750) actually do different inside the machines program with the information of color/black/HD.

Please give us a note if you see anything wrong or you can add something. If you consider to make changes to you drum or machines based on all of the above, i won’t take responsibility for my miserable investigation. Yet feel free to send you rant to [email protected] while contributing with your experience XD

I completely ignored the fact that HD ink and masters and drums in general are expensive and adding incompatibility to parts of your products may result in increased sales...